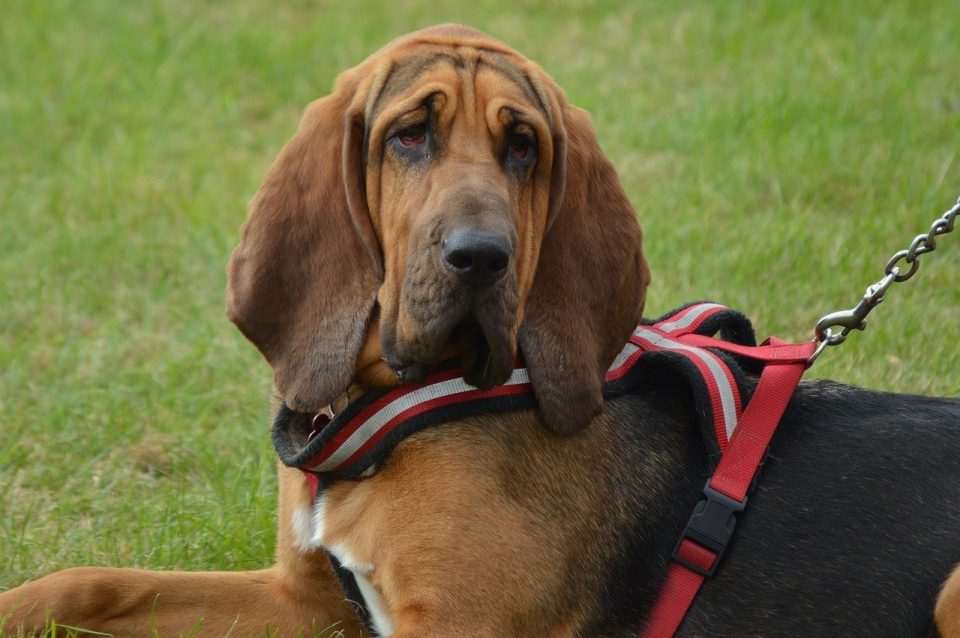 I grew up in a farm town, and everyone I knew had a dog. I have been an animal lover since I can remember, so I loved anything that had to do with animals.

My favorite movie when I was little was the Disney movie Lady and the Tramp, but not because all the characters were dogs. I was OBSESSED with the Bloodhound named Trusty for whatever reason!

For weeks I begged my parents to get a Bloodhound so I could have my own Trusty companion. Of course they said no every time, but it was my one and only wish every Christmas for a solid 3 or 4 years.

By the way, my name is Bri and I am not a loving dog mom to, not a Bloodhound, but an American Bulldog named Bruce.

I still would like to have a Bloodhound someday, but Bruce is my best friend and I would not trade him for the world! However, I did get really into Bloodhounds for a while.

When I was older my dad told me the reason we never got one was because we already had two Labradors that aggravated his allergies enough.

So having three dogs would have been a nightmare, but I never really understood his point (I would also have 10 dogs if I thought I could).

During my obsession with this breed, I learned a lot about them! One of the important things I learned about was their shedding, which is part of the reason we could not bring one into our home.

My dad’s allergies are really severe and adding another shedder to the mix of the dogs we already had would have pushed him over the edge.

That being said, I decided I would share the information I learned about Bloodhounds so that other dog parents who want one know what they are getting into!

I will cover the history of the breed, what their coats are like, how much they shed and some tips and tricks to maintaining their shedding. First, let’s talk about the history of Bloodhounds.

Do Bloodhounds Shed? How Much? As many people already know, Bloodhounds are famous for their insanely sharp sense of smell.

There honestly is not much information about where they came from originally, but we do know that they became popular in Western Europe during the medieval era.

They were members of high-ranking churches to protect the grounds of monasteries that often held large amounts of valuable items.

Over the years, hunters started learning just how keen their sense of smell was.

Eventually, police departments started using them to hunt criminals and even missing civilians.

These dogs do not give up on what they are tracking until they reach the end of the trail. This makes them a vital team member for law enforcement to this day.

Bloodhounds have a short, dense coat that helps protect them from the weather. Their fur is soft and silky and they have a lot of natural oils that helps them deflect water.

Given the higher amount of natural oil these dogs produce, they can start to develop that distinct dog odor.

That being said, Bloodhounds do need pretty regular baths to keep them clean and to avoid a stinky smell.

When do Bloodhounds Shed the Most?

Like I said, seasonal shedding is the key with Bloodhounds. There are two times a year that these dogs, much like many other dog breeds, will shed the most.

This is called shedding season which happens during the transition from winter to summer and again from summer to winter.

During shedding season, Bloodhounds will shed their current coats to make room for the new one to grow in.

The winter to summer shedding season gets rid of their dense, warm undercoat so they do not overheat in the warm summer months. The opposite happens during the transition from summer to winter!

This is a crucial step for these dogs to regulate their body temperature.

During these seasons, your Bloodhound should be brushed a couple times a week to help get rid of that dead hair before it ends up on your furniture.

Bloodhounds are relatively easy to maintain when it comes to shedding. The best tool you can have is a medium-bristle brush or a hound glove to brush them with!

A hound glove is a textured glove that allows you to rid them of excess fur while you pet them. It is definitely a win-win for your dog because they just think they are getting some extra love!

When it comes to a good de-shedding brush, I highly recommend a Furminator. These brushes will get through to the undercoat to capture all the loose fur without pulling or harming your dog.

Also a win-win with these brushes because, if your Bloodhound is anything like Bruce, they will love the back and belly scratches while you brush them!

It is also smart to have a good vacuum cleaner in your home. I love my Dyson pet hair vacuum because it was specifically made to pick up pet hair and let me tell you, it WORKS.

I’m still obsessed and fascinated by the talent that Bloodhounds have, and maybe someday I will finally get my own Trusty!

Till that day comes I highly encourage any dog parent to look into bringing one into your home.

They do shed, but they are incredibly easy to care for and controlling their shedding is extremely easy.

There really is not a dog breed that sheds too much for me to love, but Bloodhounds definitely do not shed enough to turn me away!